PYONGYANG, North Korea (Sept. 8-13, 2009) -- The capital of North Korea is a short flight from Beijing but soon after landing you can't help but feel like you're on a different planet. As a private pilot, I immediately appreciated the vintage Tupolev 154 aircraft waiting at Beijing airport's terminal 2. Yes, an old Russian-made plane with none of the amenities of today's Boeing and Airbus aircraft. But it was a fitting introduction to my six-day tour of one of the most isolated nations on earth.

Here are a few photos, but many more details will follow. Check back soon!

Pyongyang is the capital of North Korea, located on the Taedong River, with over 3 million inhabitants. The city was split from the South P'yŏngan province in 1946. It is administered as a directly-governed city. The capital has been completely redesigned since the Korean War (1950–1953), where most of the city was destroyed by aerial bombing. It has very wide avenues, imposing monuments, and monolithic buildings but very little traffic and almost no Western-style commercial activity. The tallest structure in the city is the uncompleted 330-meter (1,083 ft) Ryugyŏng Hotel. This hotel has 105 floors, and was planned to be topped by several revolving restaurants. After many delays, construction has again picked up this year for a tentative completion in 2012. 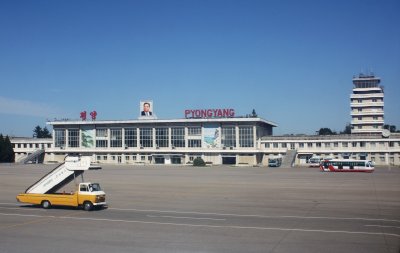 Above: Pyongyang airport is a very basic facility, and two weeks it ago hosted former U.S. President Clinton and his delegation who'd arrived to facilitate the release of two American journalists. 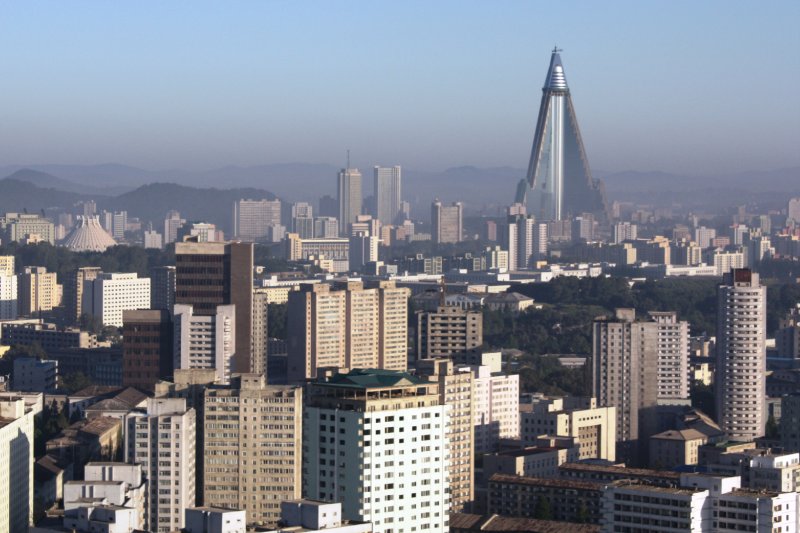 Above: The skyline of Pyongyang, the capital of North Korea.

Some notable landmarks in Pyongyang include the Kumsusan Memorial Palace, the Arch of Triumph (heavily inspired by the Arc de Triomphe in Paris but of a larger size), the reputed birthplace of Kim Il-sung at Mangyongdae Hill, Juche Tower, Pyongyang TV Tower, and two of the world's largest stadiums (Kim Il Sung Stadium and Rungrado May Day Stadium), and the Arch of Reunification over the multi-laned Reunification Highway that stretches from Pyongyang to the Demilitarized Zone (DMZ). 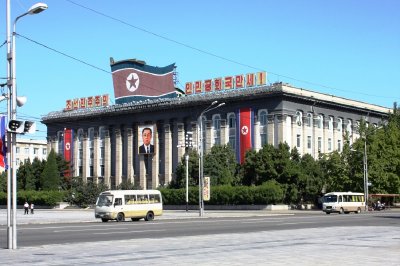 Above: The building of the DPRK People's Party in the center of Pyongyang. 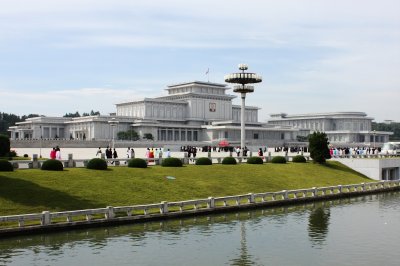 Above: The Kumsusan Memorial Palace, sometimes referred to as the Kim Il-sung mausoleum, where the body of the nation's founder lies in state since his death in 1994 (North Korea is among four nations who have embalmed the corpses of their founding leaders. The others are Lenin, Mao Zedong, and Ho Chi Minh). 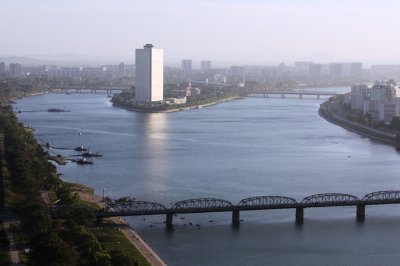 Above: The Yanggakdo International Hotel where I stayed on the 36th floor, with great views of the city. 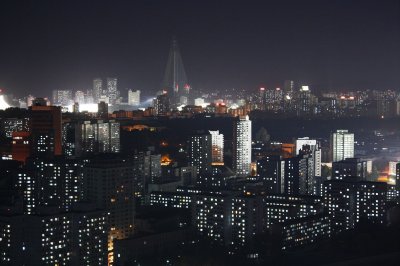 Above: Pyongyang by night (seen from my hotel room). 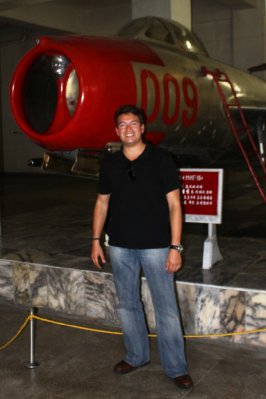 Above: A North Korean Air Force MiG-17 fighter-bomber from the Korean War (1950-53) at the Victorious Fatherland Liberation War Museum in Pyongyang. 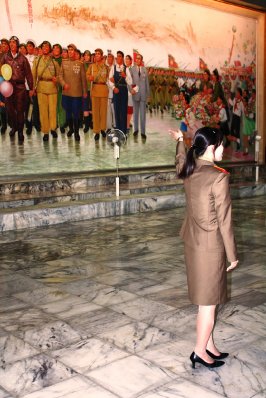 Above: A military guide points to a huge patriotic mural in the lobby of the Victorious Fatherland Liberation War Museum. 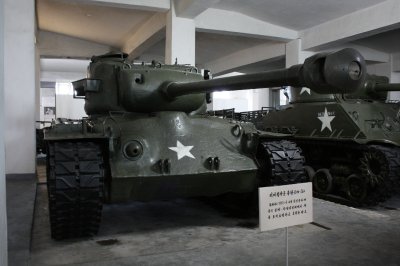 Above: U.S. Army tanks, along with destroyed or captured aircraft and weapons, left over from the Korean War are also on display at the Victorious Fatherland Liberation War Museum. 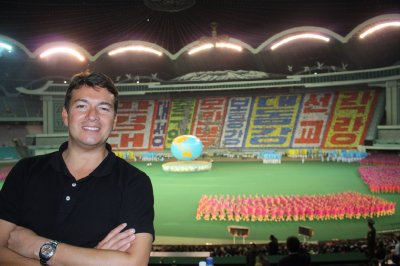 Above and below: I attended the Mass Games in the Rungnado May Day Stadium, built as a multipurpose facility in 1989. The Mass Games are seasonal performances by thousands of trained participants that combine performing arts, gymnastics, choreography with strong patriotic and native cultural themes. I found interesting the performance by mini-skirted military women with swords and knee-high army boots. 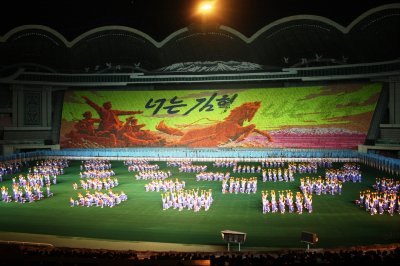 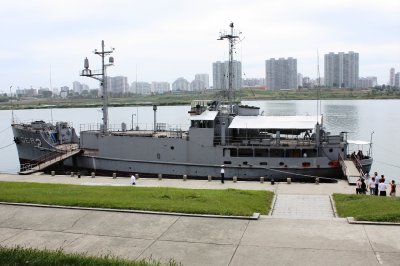 Above: The USS Pueblo is on display in Pyongyangs. The vessel a Banner-class technical research ship (U.S. Navy intelligence) which was boarded and captured by the DPRK military on January 23, 1968. Evidence appears to favor the DPRK account that the ship was operating intermittently in its territorial waters, although the U.S. has retracted its apology and written admission, which were made in order to facilitate the release of the crew. The North Korean government released the 82 remaining crew members after eleven months in captivity. For more information on the USS Pueblo incident, click here. 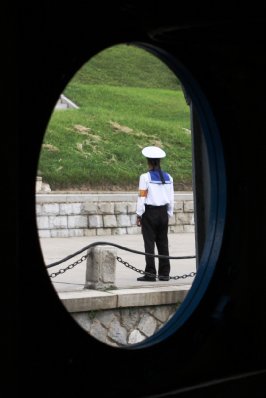 Above: A DPRK sailor guards the dock where the USS Pueblo is anchored. 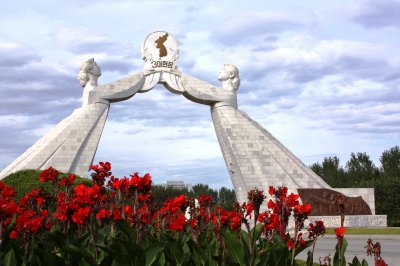 Above: Heading south of Pyongyang is the Arch of Reunification which spans over the Reunification Highway. Only cars (and there are very few in the country) are allowed to pass under the arch, while trucks pass around it. The Reunification Highway has about four military checkpoints along the way, and at three locations the roadway can serve as a reserve military airstrip (each about a 2000 meter stretch). 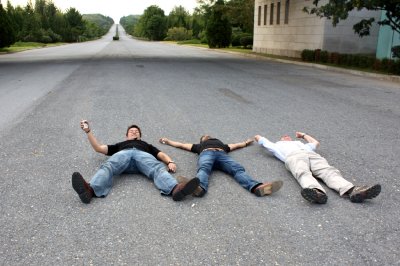 Above: The deserted highways of North Korea (you'll never get run over!) heading south toward Kaesong.

Kaesong, Panmunjom and the Demilitarized Zone

Kaesŏng is a city in North Hwanghae Province, southern North Korea (DPRK), and the capital of Korea during the Koryo Dynasty. The city is near Kaesŏng Industrial Region and it contains the remains of the Manwoldae palace. It was formally named Songdo while it was the ancient capital of Koryo and is home to the Koryo Museum on the grounds of the ancient university. The city prospered as a trade center and is known for producing Korean ginseng. The city is close to the Demilitarized Zone that divides North and South Korea. When Korea was partitioned at the 38th parallel after World War Two, Kaesong was on the southern side of the line (within the Republic of Korea), but this changed after the armistice at the end of the Korean War, thus making Kaesong part of North Korea. 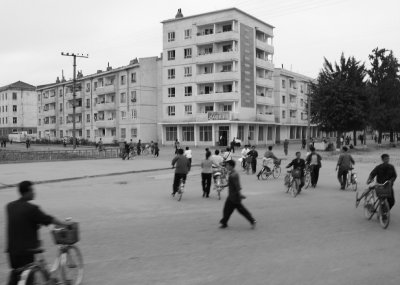 Above: End of a workday in downtown Kaesong, North Korea. 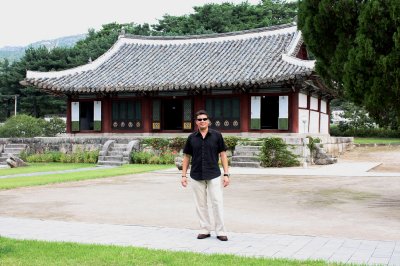 Above: The Koryo Museum in Kaesong. 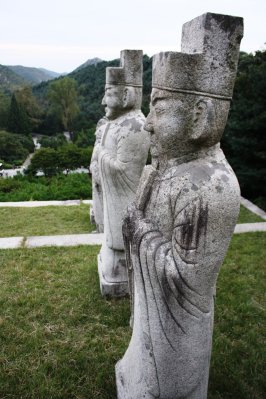 Above: Near Kaesong are tombs from an ancient dynasty. 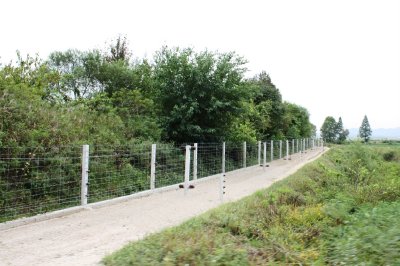 Above: barbed wire, electrical fences and mines help separate the border near the Demilitarized Zone. 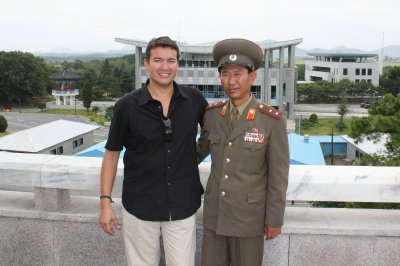 Above: Visiting Panmunjom in the DMZ in the company of a Lieutenant Colonel of the Korean People's Army. The buildings in the background are South Korean/U.S. observation posts across the border. 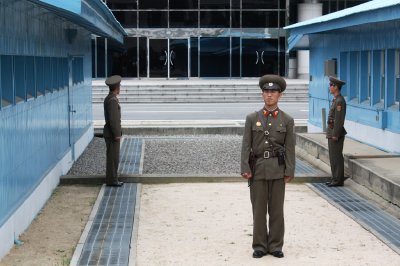 Above and two pics below: North Korean soldiers guarding their side of the border zone at Panmunjom (notice in pictures below -- the U.S. serviceman taking pictures of me and my group near the glass doors in the background). 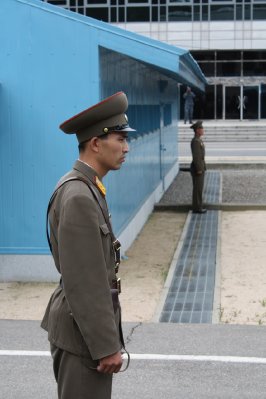 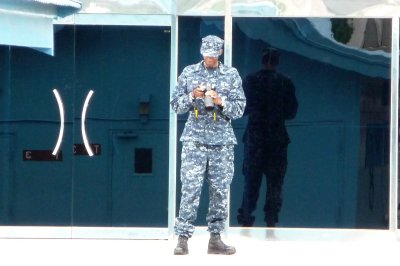