HO CHI MINH CITY, Vietnam (Jun. 13, 2008) -- After brief stopover in Hong Kong, I arrived in Ho Chi Minh City, Vietnam, to conduct research for a new novel Woman At The Citadel, a mystery/political/romance that set in Indochina in 1951. I'm about a quarter into the manuscript, an ideal time to visit Vietnam and get more information about its colonial past, including its architecture in. But as an author, I find that on-site research is not only to see the settings for my book. It's also about understanding the culture, filling my scenses with the surroundings, finding off the beaten path places to supplement the better known locations, and uncovering information that is not readily available back home, such as limited edition books, archived documents, historical maps, old currency and other items that shed more light on the past. This will help me better develop my plot, the locations and the characters. And like many of my prior research trips, on-site visits often lead to scenes for later manuscripts, not just for the one I'm working on at the time of my travel.

What first struck me about Ho Chi Minh City is the traffic, or more precisely, the chaos of motorbikes and cars filling every inch of asphalt on the mostly narrow streets of this city of eight million inhabitants. There are no rules it seems. Bikes flow like water through the path of least resistance around other bikes, cars, pedestrians and other obstacles. Yikes! 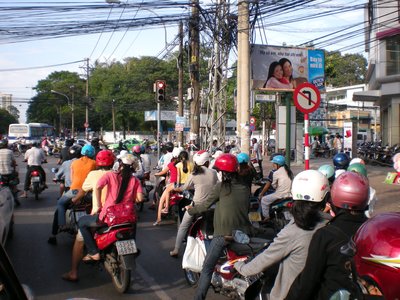 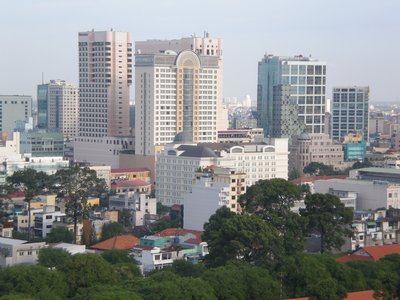 (above) The center of HCMC is quite modern, with popular restaurants and shops, as well as rooftop bars with great views, including the Saigon Saigon bar at the Caravelle Hotel, the one at the Rex Hotel, and my favorite at the Majestic Hotel (where I also stayed on my return from Hanoi). 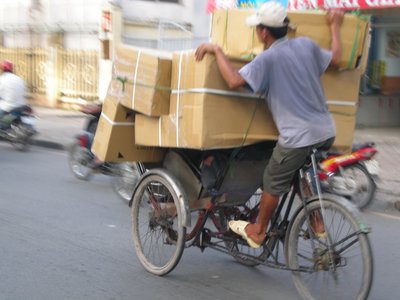 (above) People carry almost anything on their scooters, including furniture, infants, large produce bags, bundles of clothing, you name it. 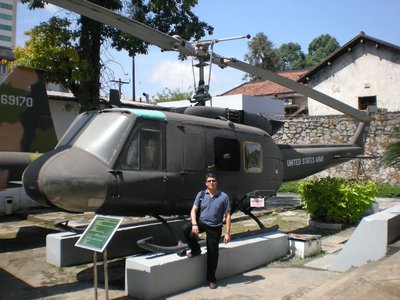 (above) The War Remnants Museum has many American military hardware on display, as well as gruesome pictures of war attricities. 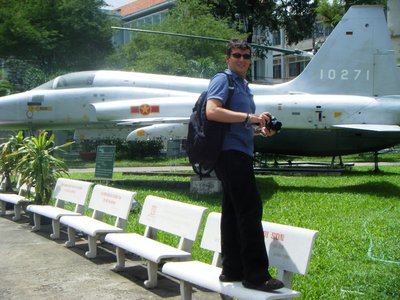 (above) I explored the relics of war on the grounds of the Ho Chi Minh City Museum (Viện bảo tàng Thành phố Hồ Chí Minh), a key historical site situated at the corner of Lý Tự Trọng street and Nam Kỳ khởi Nghĩa street. Called Gia Long Palace before the Fall of Saigon, it was the office of President of the Republic of Vietnam, Ngô Đình Diệm, when he returned to Vietnam following the 1954 Geneva Conference (though he was murdered in a coup d'etat in November 1963). His successors continued to work there until the Independence Palace (since 1975, the Reunification Hall) was completed. It has been a museum since the fall of South Vietnam. And given that the day I visited it was Sunday, the place was full of newlyweds getting their picture taken (why on earth here??). 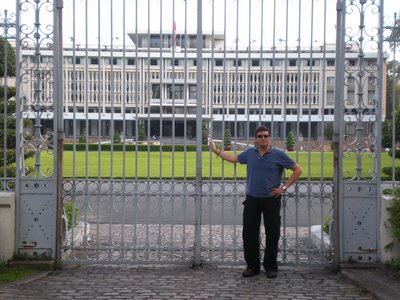 (above) The Reunification Palace (Dinh Thống Nhất), formerly known as Independence Palace (Dinh Độc Lập), was built on the site of the former Norodom Palace and is a key historic landmark. Designed by architect Ngo Viet Thu as the residence of the President of South Vietnam during the Vietnam War (note that the Vietnamese refer to the conflict as the "American War"). The building is most notable for its symbolic role in the fall of Saigon in April 1975, when NVA tanks crashed through its gates and the victorious communist troops flew the flag on the balcony. 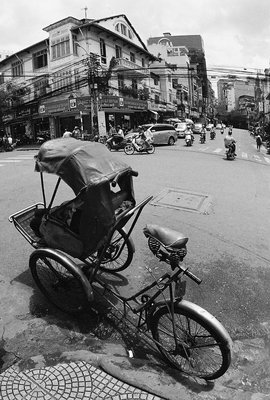 (above) In town you can also find the venerable cyclos (called "pouse pouse" in the French days). There are fewer in HCMC than in Hanoi because of police restrictions aimed at reducing traffic congestion. This picture was taken on the north entrance of the large Ben Thang market. 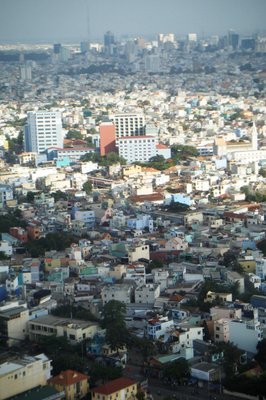