Researching a key election campaign for my upcoming political thriller

MONTEVIDEO, Uruguay (Feb. 10, 2009) – I traveled to Uruguay to continue researching political issues that have a connection to my upcoming novel set in Latin America. As in my prior trip to Uruguay in early 2008 and to other destinations in Argentina, Bolivia, Chile, Mexico, Panama and Venezuela since 2007, I've interviewed key politicians, officials and authors as well as investigated sites relating to my story. For this particular research trip, I spent some time in the capital, Montevideo, and in the trendy resort town of Punta del Este. And it's exciting to see it now, because in this tense election year, Uruguay may be on the verge of a significant political change (to the right). This may be a indication of things to come, especially on the sustainability of current leftist movements throughout Latin America. 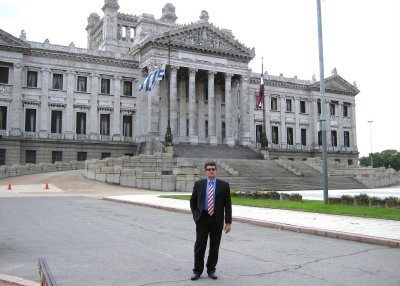 Above: The Palacio Legislative (Uruguay's parliamentary or capitol building). 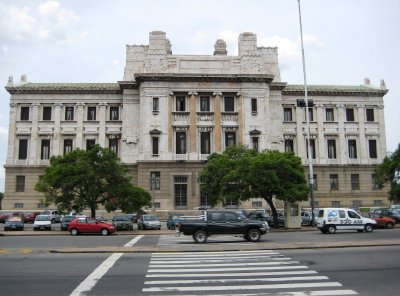 Above: The east side of the Palacio Legislative, facing the newer parliamentary annex building. 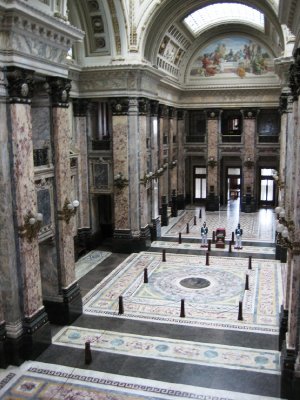 Above: Inside the main atrium of the Palacio Legislative, with the ceremonial guard standing at attention in the center.

Uruguay has a mixed history of dictatorship and democracy, coupled with frequent overt and covert foreign intervention. This makes the country a good example of the paradox encountered in my novel, the manuscript of which is now more than half completed. So, during my visit, I met with Senator Francisco Gallinal of the National Party (aka, the Blancos) at the senator’s offices in the Palacio Legislativo (the parliament building) in Montevideo.

The building is beautiful, inside and out, but it needs some renovation. I was surprised to see that security was quite passive, with few guards and a metal detector that didn't pick up most of the metalic items I carried (cell phone, pens, change, camera, etc.) -- was it even plugged in? Anyway, it was a sharp, pleasant contrast to my visits to government offices in Washington, D.C., where security is thorough and annoying. Once inside, the similarities reappear. Hallways and offices this capitol building resembled so many others. I arrived at Senator Gallinal's office a bit late (the taxi driver took me to the parliament annex, even though I had told him the correct address). And there I was, with my notepad and about 20 questions for the Senator, who greeted me warmly in his office (which also needs some renovation and better lighting -- a result of budget cutbacks, I'm sure).

With his legal background, Senator Gallinal has been instrumental in recent legislative developments, particularly with reforms in health care, education and telecommunications. He has served in the Senate since his election in 2000 and has become a vital ally of Dr. Luis Lacalle, the National Party’s leading presidential candidate for the October 2009 elections. This makes him particularly knowledgeable in the structural/institutional development of the country, both from an economic and social aspect. However, his allegiance to the Blancos party and his constituence cannot be questioned. He sees the future of Uruguay very differently than many others I've spoken to in the country, particularly leftists. 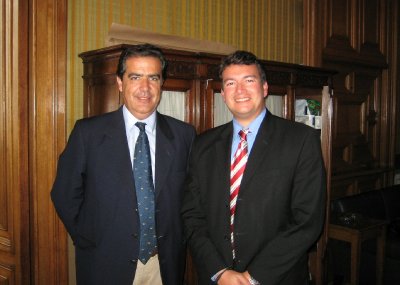 Above: Senator Francisco Gallinal standing next to me after our hour-long meeting. 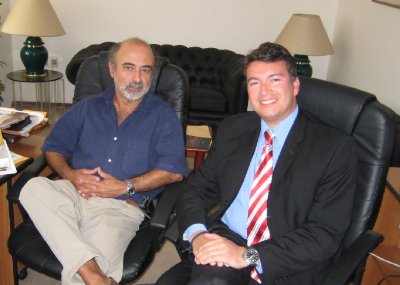 The interview with Mr. Lessa focused a lot on politically important topics relating to Uruguay in particular, and South America in general. Of special interest to me were Lessa’s perspectives on reconciliation with Uruguay’s past dictatorship and the Tupamaro terrorist group, since the press is often a fragile pillar of democracy. It was very interesting to hear first hand the evolving roles of journalists during and after Uruguay’s dictatorship. Mr. Lessa also gave me a tour of the station and let me see the live midday newscast from the studio floor. 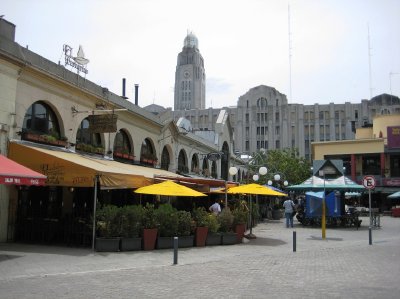 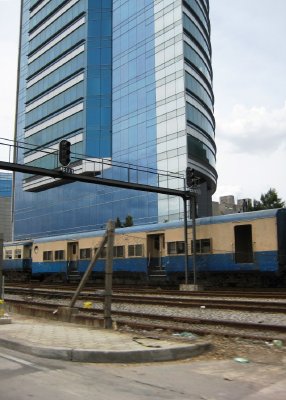 During my stay in Punta del Este, I had the pleasure to interview Dr. Augusto Durán Martínez, a law professor and legal advisor (Prosecretaría de Presidencia) to former Uruguayan President Luis Lacalle (who is now running in the 2009 elections). Dr. Martinez has extensive experience in international law, human rights and constitutional law. We talked at length (mostly in French, which Dr. Martinez speaks very well) about Uruguay’s political problems and issues facing the continent as a whole, among them complex matters relating to MERCOSUR, the OAS and relations with Argentina and Venezuela. 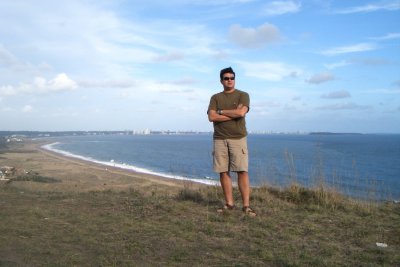 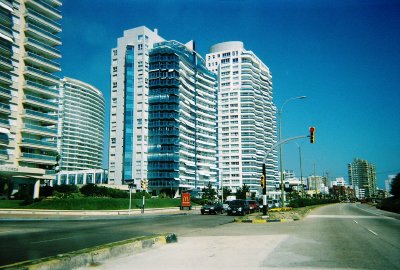 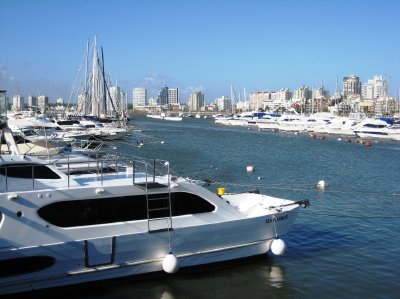 I also had an extensive discussion in Montevideo with Dr. Alphonse Max Emanueloff, one of Uruguay’s most experienced journalists and political observers. With his background as editor of the daily Ultimas Noticias and other publications, and with his insights into the turbulent years of the dictatorship, Dr. Emanueloff shared his candid views on the Uruguay’s historical left-right political struggles and the failures of the current governing leftist coalition, the Frente Amplio. He has authored numerous books on politics and international relations since receiving his doctorate in political science in the U.K., after which he moved to Uruguay and served as a foreign correspondent for various publications in South America, the U.S., Africa and Australia. 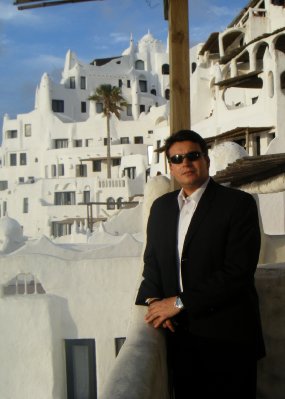 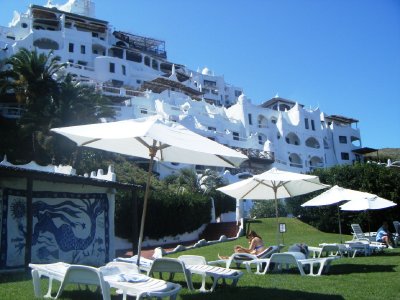 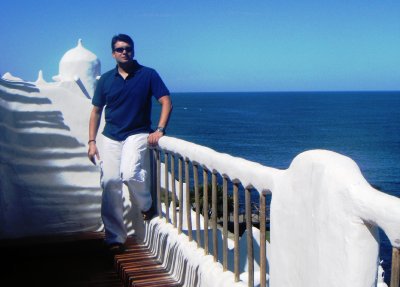 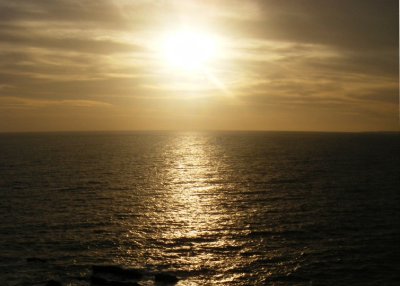 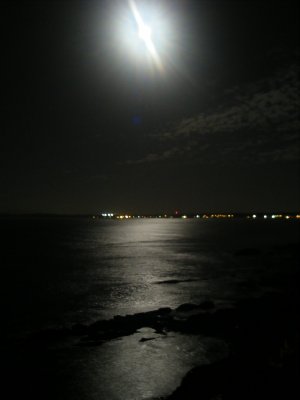 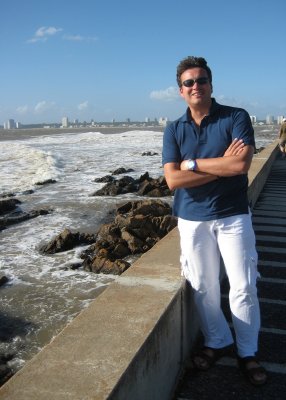 more info and pictures will be uploaded soon.