Scouring Vegas for One Hot Scene

Searching for the ending scenes of my upcoming novel, The Serpent's Game.

LAS VEGAS, Nevada, USA (May 3, 2008) -- The other day I was finishing the outline for The Serpent's Game, the sequel to my 2006 spy thriller Tranquility Denied (Avendia Publishing, 2006). I had already done some research in Mexico and Poland for scenes to use in the book, but as I always do in my novels, I like to know the details of the ending before I get too immersed in the other chapters. So, I thought long and hard about it and came up with Lake Mead and the Grand Canyon for the final battle between the hero (lawyer Jonathan Brooks) and the villain. The scene, which consists of three parts rolled into one chapter, will involve a dramatic helicopter and SUV chase scene, but will end on a more sedate note with a tinge of ambiguity. Most importantly, to do the job well, I decided to research the scene on-site.

I headed to Vegas filled excitement about the journey. The first day was consumed with sightseeing on the Strip, shopping and great food, after which I returned to the Luxor exhausted. The real treat was for the second day. With two cameras (always have a back-up), I boarded the chopper from Maverick Helicopters at the airport. The next four hours were a real treat and offered me all the insight I needed to develop the scene. 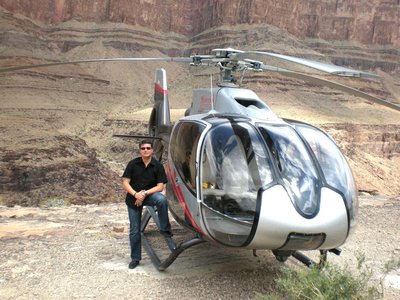 (above) Standing next to the highly maneuverable EC-130 helicopter.

The helicopter took me over Las Vegas, Frenchman Mountain, Lake Mead, Hoover Dam and along the Colorado River into the western part of the Grand Canyon. The helicopter touched down on a ledge for a brief Champagne toast and lunch and then took off again for other impressive sites just south of the main canyon. After a refueling stop in the middle of nowhere, the flight continued to the sulfer and iron rich grounds north of Lake Mead (a place called the "Bowl of Fire"). And heading back over the city offered superb views of the Las Vegas Strip, the huge casino hotels, the Stratospere and other spots of interest. And as a private pilot, I especially appreciated the scenery and the maneuvres deep in the canyon itself. As you can see from the photos below, it was amazing... 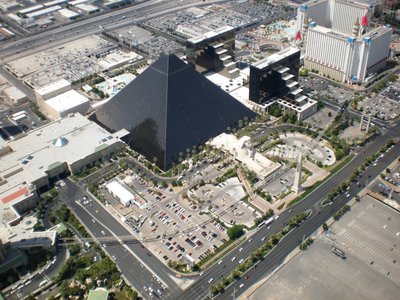 (above) Flying over my hotel, the Luxor casino and resort 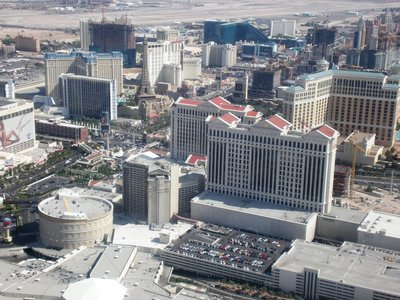 (above) View of the Las Vegas Strip (Caesar's Palace, the Paris, and the Bellagio are visible). 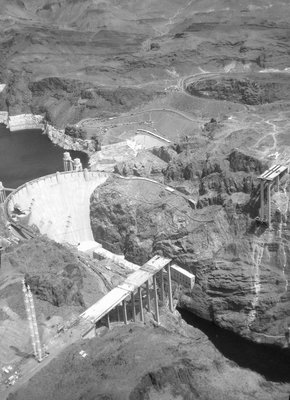 (above) Flying over Hoover Dam (note construction of the new bypass) 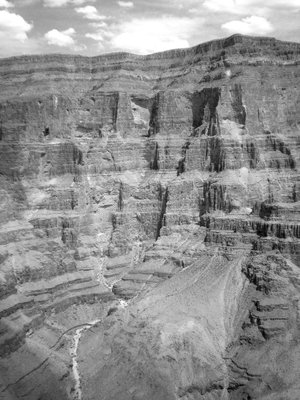 (above) Aerial view of the canyon's impressive rock formation. 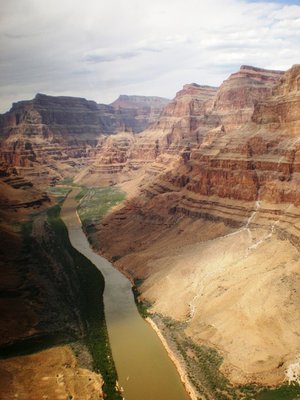 (above) The Colorado River snaking through the canyon. 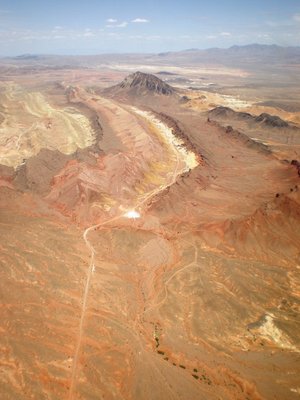