Return to Acapulco on the Trail of My First Novel

A Journey to relive parts of my first novel, Canvas Sunsets Never Fade, and plan its sequel.

ACAPULCO, Mexico (Jun. 14, 2006) -- I'm here again in Acapulco, Mexico, at the Las Brisas resort, which is the spectacular setting for several scenes in my debut novel, Canvas Sunsets Never Fade (Avendia Publishing, 2004), now in its third U.S. printing. Using the resort as his base of operations, the story’s main character, Richard Nash, tracks down the elusive Lina Mundhir, a wealthy woman and sister of the FBI’s lead suspect wanted in connection with the murder of the Saudi Ambassador’s wife. But Nash’s success in finding Lina is short-lived, as both of them suddenly find themselves pursued by killers who will stop at nothing to silence them. They barely escape from Acapulco and head inland in a desperate attempt to stay alive. 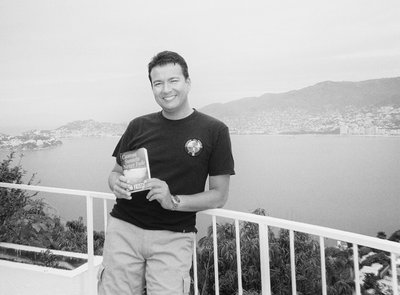 (above) I am holding a copy of my first novel on the deck of my casita, in front of one Mexico's most striking panoramas.
(below) Not only are the private casitas and pools at Las Brisas a perfect place to write novels, they are also great spots to include in stories, as was the case for my first novel. 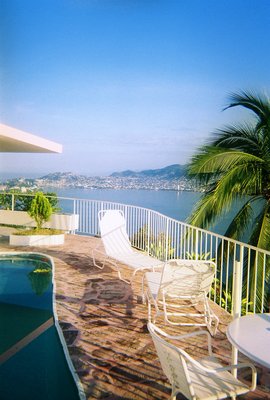 This was my sixth trip to Acapulco (each time at the Las Brisas resort) but my first since Canvas Sunsets Never Fade was published in 2004. I had the pleasure of again meeting several members of the resort’s management and donating copies of his book. I'm also planning to a sequel, which for nostalgic reasons will include scenes from Acapulco. 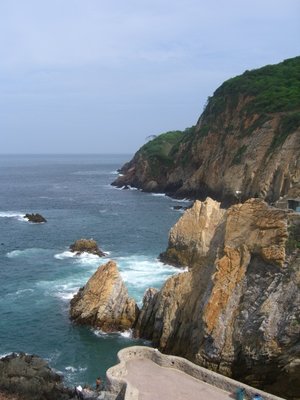 For details, read the press release.