South Beach (Miami), Florida, USA (July 3, 2008) -- Ok, so you're thinking beach, bikinis, night clubs, Miami, the sun, July 4th... Hard to believe, but it's not really vacation. One of the key reasons for my stopover here (I'm on my way to Florida's gulf coast) was to meet with sources, one in particular in the intelligence community who could give me enlightening information on three important topics: the U.S.-Colombian special forces rescue of hostages held by the FARC; the recent Israeli Air Force strike on the Al-Kabir nuclear reactor under construction in east-central Syria; and SIGINT updates on Israeli preparations for a strike on Iranian nuclear and ballistic missile sites. 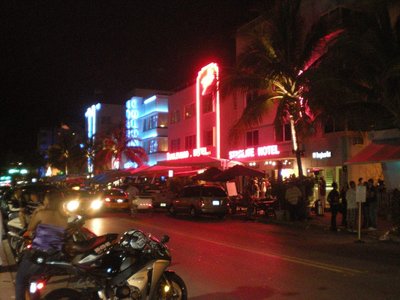 (above) The south end of Ocean Drive in the South Beach neighborhood of Miami is very much alive, even at 4 a.m.

Like most authors with a background in Intel and the military, I've maintained and expanded over the years a useful network of contacts in the diplomatic, intelligence, and military communities worldwide (incl. retired or active US State Dept., DSS, Shin Bet, Mossad, FBI, NSA, SRS/SND, DRM, BPOL, and BND members and other foreign gov't officials). So when intelligence related events occur that have relevance to any of my upcoming novels (whether still being written or in the editing phase), I like to tap into these contacts for their insight. But to do so, I often have to meet in person (avoiding emails or phone calls -- quite tricky sometimes). That's the best way to keep them anonymous and get the most candid and detailed information. Like any sources for journalists and writers, they want the assurance of anonymity. This information can then be of use in developing or refining my plots or the various Intel/MIL techniques described in my fiction novels and in my non-fictional research publications.

My rendezvous took place in a couple places around town (can't name them, of course -- there are cameras everywhere these days). I stayed in the heart of South Beach, had a late night dinner at News Cafe, hung out the next day at the acclaimed Nikki Beach and relaxed and people-watched at the sidewalk cafes/restaurants of the Ocean Five Hotel and the Beacon Hotel. I also spent a little time at some interesting hangouts on Lincoln and at the Delano Hotel, one of the trendy nightspots in this part of Miami. 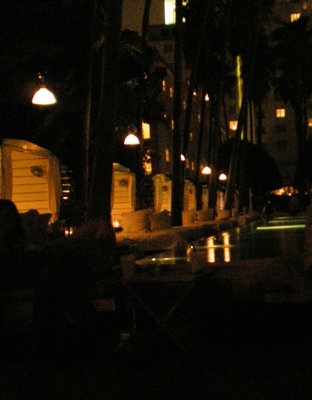 (above) The pool area at the Delano at night. Located on Collins Avenue in South Beach and directly on the ocean, the Delano is a world-class urban resort with a splendid outdoor area surrounded by bungalows, ultimate cushioned seating and hip music.