Research trip to Argentina and Uruguay for Frieden's upcoming novel, Where Spies Go To Die.

BUENOS AIRES, Argentina (Dec. 29, 2007) -- I embarked on an intense research tour of Argentina and Uruguay. This trip adds to my already extensive travels in Mexico, Venezuela and Bolivia, all of which are for my upcoming novel Where Spies Go To Die. Arriving in the Argentine capital a couple days before New Years, I toured key locations for scenes involving my book's main fictional character, Emilio. These included the neighborhood of San Telmo, the birthplace of Tango, as well as La Boca, the oldest part in the city, and the restored area of Puerto Madeiro, a spot filled with modern lofts and highrises and hip restaurants. And as a special treat, I toured the city’s coastal neighborhoods by helicopter. 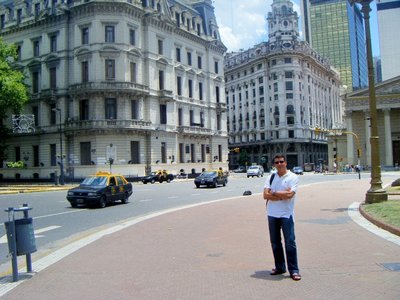 (above) Standing at the west end of Plaza de Mayo, the central square in the heart of Buenos Aires where stand the Metropolitan Cathedral, the National Bank, the Revenue Department, City Hall and other important buildings. At the center of Plaza de Mayo is the General Manuel Belgrano monument, made by Albert-Ernest Carrier-Belleuse and Manuel Santa Coloma (pictured below). 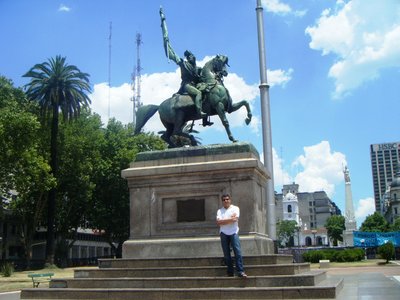 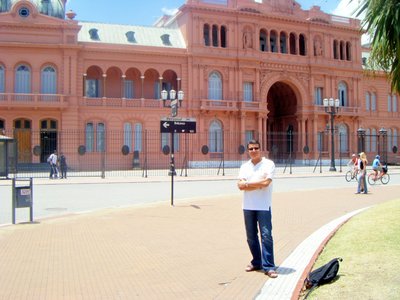 (above) At the other end of Plaza de Mayo and across from the Belgrano statue stands the Casa Rosada, the former residence of many Argentinian presidents, and mostly known for being the place Eva Peron made her famous speech (the balcony on the top floor). 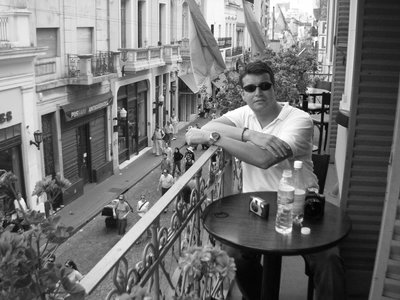 (above) Sitting on a balcony overlooking the main Plaza Dorrego, the main square in San Telmo, one of the most beautiful and historic barrios in the capital. San Telmo is the birthplace of tango, and is filled with wonderful restaurants, art galleries, street musicians, antique stores, as well as a interesting market in the main square.

Another component of my research is to examine the leftist transitions, particularly in socio-economic and political in governments throughout Latin America. It is not just to see the sites, but to understand the societal influences that make this part of the world unique, and helps to explain the current political movements. During my stay, I conducted various informal interviews with locals regarding the current political and socio-economic environment. 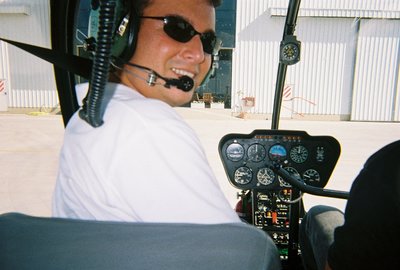 (above) Seated and ready for the helicopter tour of Buenos Aires. 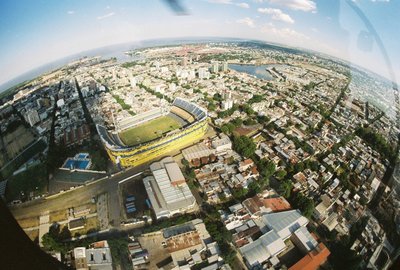 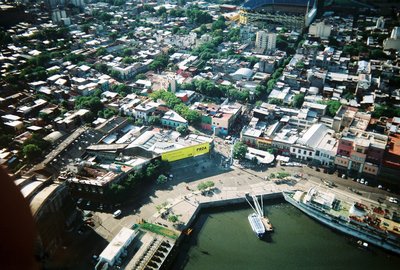 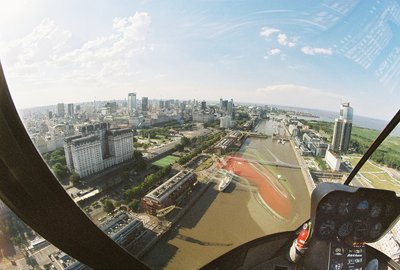 (above) Flying over the hip waterfront area of Puerto Madero in Buenos Aires. Puerto Madero takes up a significant stretch of the Río de la Plata riverbank and hosts some of the city's latest architectural works, ranging from modern residential glass towers to completely renovated red brick lofts, as well as state-of-the-art luxury hotels. 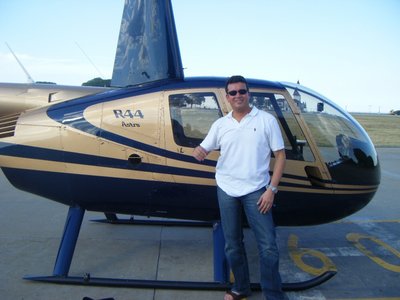 (above) Standing by the helicopter after it landed at AeroPark airport, the city's regional aiport on the waterfront.