An Inside Look at Venezuela's Political Landscape

CARACAS, Venezuela (Jul. 10, 2007) -- I arrived in Caracas to continue research for my upcoming political thriller entitled Where Spies Go To Die. In hopes of better understanding the complex and ever-changing political environment in Venezuela, which forms an important basis of the novel’s plot, I interviewed key people from the country’s political, diplomatic, academic, business and literary communities.

I had the fortune to interview Herma Marksman, a historian who spent nearly ten years as “the other woman” at the side of President Hugo Chávez Frías during his rise to power and through his imprisonment in the early 1990s. As Hugo Chávez’s lover, Herma shared his passion for a new Bolivarian revolution, but today she considers herself part of the opposition, dismayed by the extreme politics of the man she once new intimately. In 2002, she and noted political analyst Alberto Garrido co-authored the book El Otro Chávez, a portrayal of Hugo Chávez through her eyes and she has since stopped meeting with the press. She is an elegant, knowledgeable woman and made the 4 hour interview an enjoyable experience. 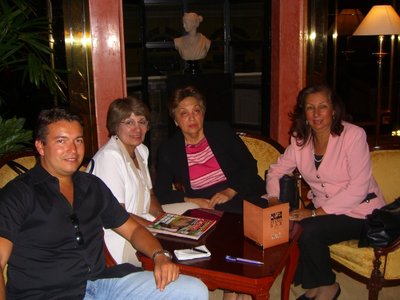 (above) Interviewing Herma Marksman (second from right) at the Gran Melia hotel. 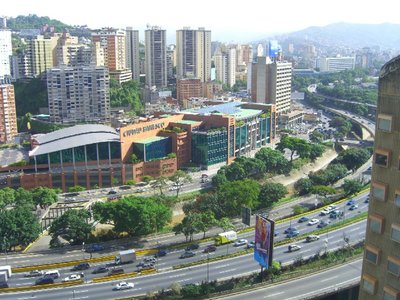 (above) The bustling urban heart of Caracas viewed from my room at the Gran Melia hotel.

I also interviewed various local and foreign government officials and representatives, including Benedict Gubler, Chargé d’Affaire at the Embassy of Switzerland in Venezuela, as well as members of academia, including Professor Romelia Hurtado (Romy), a Caracas native and professor at Eastern New Mexico University; Professor Aida Bexama Farias, University of Chili in Santiago; and Dr. Carmen Sweeting, Principal, Colegio Internacional de Caracas. Although I had anticipated a sharp contrast of views on the current political situation, much like the polarity of views on the Bush administration, it seemed to be far more personal to the citizens of Caracas. Indeed, Venezuela is a divided nation.

My metro and taxi, I visited the city's most important sites, like the Plaza Bolivar and walked by Miraflores, the presidential palace. I also visited Avila, the mountaintop oasis with spectacular views of the city and a short distance away on the other side, Galipan, with its views of the Caribbean coastline. 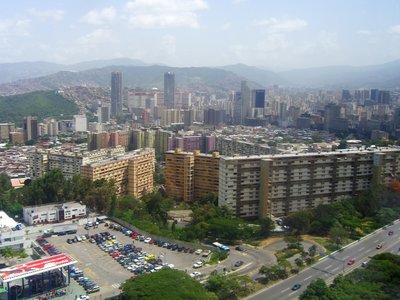 (above) View of Caracas from the condola to Avila mountain top. 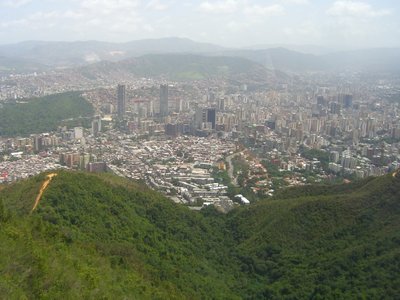 (above) View of the city from higher up the slope of Avila. 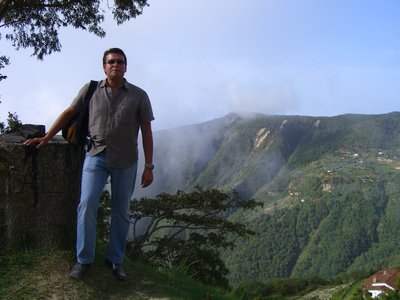 (above) Near the village of Galipan, north of Caracas.

I also explored some of the areas of Caracas that tourists never see, including some of the slums like Petare, which I've included a few scenes in the novel. 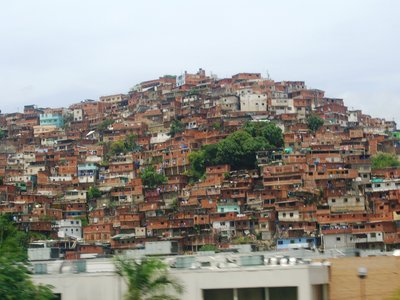 (above) The slums of Petare on the eastern side of Caracas.

Quite surprisingly, to conclude my visit, Romy managed to arrange a clandestine meeting with several militant and moderate chavistas, including attorneys, sociologists, a government ombudsman, state engineers and physicians, many of them exercising significant power in Chávez's government and political movement. After being screened at two downtown locations, I finally was ushered to a private room in the back of a restaurant, where the core team waited with mixed drinks in hand, smiles, rehearsed answers and a good dose of curiosity about my research interests and background (no, amigos, I am not with the CIA). It was a lively discussion and no topics were off limits. It was interesting to witness disagreements from within the group, particularly relating to Chavez's policies on oil revenue distribution and international relations. 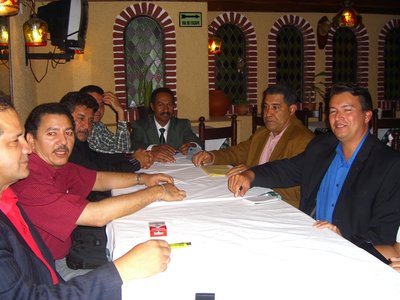 (above) Clandestine meeting with key members of Chavez's party.