My Own Bolivian Diary

An investigative journey on the trail of Che Guevara's failed rebellion.

VALLEGRANDE, Bolivia (Nov. 22, 2007) -- I had been thinking about it for weeks. The excitement could hardly be contained. Finally, I was on my way to Bolivia to research Che Guevara’s 1960s revolutionary movement to complete my upcoming novel Where Spies Go To Die. My flight from Chicago connected through Miami and then stopped briefly in La Paz before continuing southeast to Santa Cruz de la Sierra. The views from my window seat of the landing and takeoff in La Paz were impressive. Upon arriving in Santa Cruz de la Sierra (commonly known as Santa Cruz), I headed straight to my hotel downtown, the Gran Hotel Santa Cruz on René Moreno street. It was a classic luxury hotel in its heyday (the 70s), but now appears to be struggling to keep its four stars. But its the only top hotel in the heart of the city's historical center and only two blocks from the main square, the Plaza 14 de Septiembre.

Santa Cruz is the capital city of the Santa Cruz department in eastern Bolivia and the country's largest city (population over 1 million). The city was founded in 1561 by Ñuflo de Chávez, who gave the new settlement its name, meaning "Holy Cross of the Hills," in honor of his beloved native city in Spain. For my research, the city was significant in that it was one of the transit points for Che Guevara and his rebels in 1966. I visited many of the city’s key sites and interviewed a number of locals in preparation for my journey south. 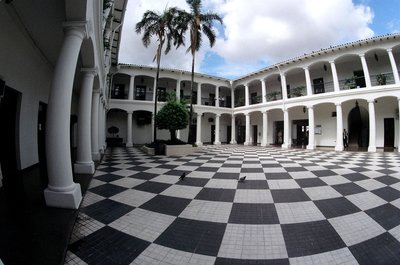 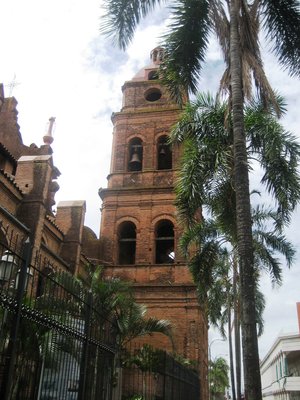 (above) The Metropolitan Cathedral in Santa Cruz stands in front of the Plaza 14 de Septiembre. 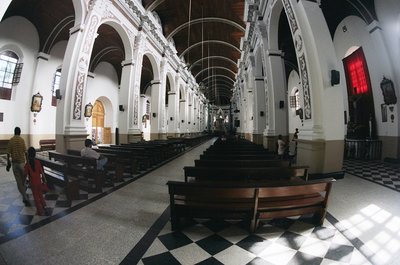 (above) Interior view of the cathedral, which was built in the late 19th century.

After my second day in Santa Cruz, it was time to head south to find the "Che" trail. I left in a tired clunky taxicab and spent the next three hours conversing with the driver in my broken Spanish (being fluent in Portuguese doesn't always mean you can say much in Spanish -- I can understand almost everything said to me, but can't respond well). The road twisted around rocky, tropical terrain and skirted hillsides overlooking rivers and streams. It was a welcomed relief when my taxi finally brought me to Samaipata, where an SUV with an experienced driver would take me the rest of the way (thank goodness, since the roads are even more perilous further south!). 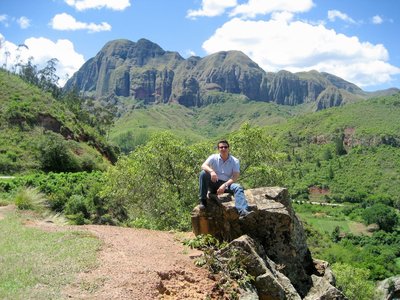 (above) The road to Samaipata from Santa Cruz de la Sierra.

After a brief stop in Samaipata, my driver and I headed through the rough highlands to Vallegrande to see various sites related to Che Guevara. In particular, I visited the Señor de Malta hospital, where Che’s body was flown after his execution at La Higuera. Frieden toured the airfield and nearby grounds where Che’s remains and those of his most loyal comrades were secretly buried in 1967. 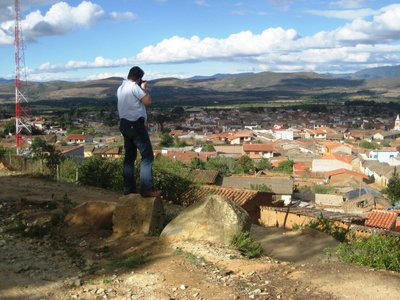 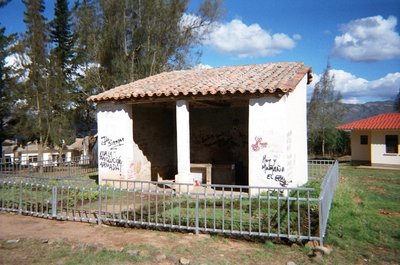 (above and below) The hospital laundry room where Che's body was shown to the public. 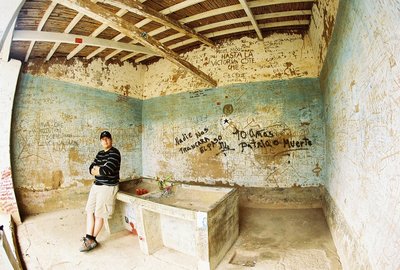 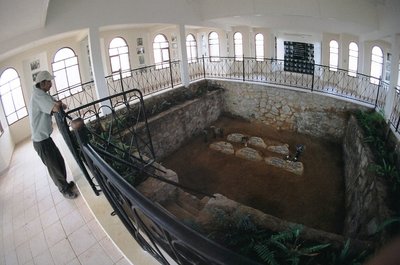 (above) Memorial built around site where Che's remains were secretly buried for over three decades. 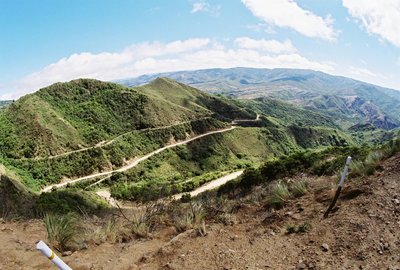 (above) The winding mountain road toward Pucara and La Higuera.

After visiting the town of Pucara, I arrived in La Higuera (elevation of 1950 m) some 225 km by road from Santa Cruz de la Sierra, and toured the schoolhouse where Che was executed in October 1967 by CIA-backed Bolivian troops shortly after his capture in the nearby canyon called Quebrada de Yuro. In La Higuera, I interviewed a village elder who had witnessed Che’s arrival into the village 40 years earlier. Today, La Higuera has a population of about 100, mainly indigenous Guarani people. Politically La Higuera is part of the Pucará municipality. 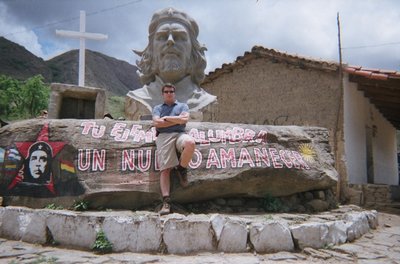 (above) The monument in Che's memory in the village center of La Higuera. 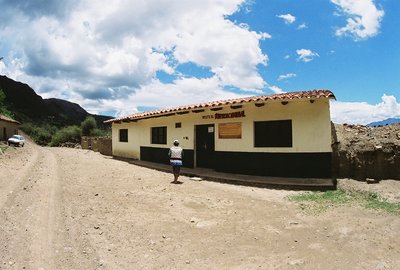 (above) The schoolhouse where Che was executed in 1967.

After my days in La Higuera and the Vallegrande area, I returned to Samaipata, where I toured El Fuerte, an archeological site (designated a world heritage site by UNESCO) that was inhabited by three populations over several centuries: the Amazonian, Inca and Colonial civilizations. 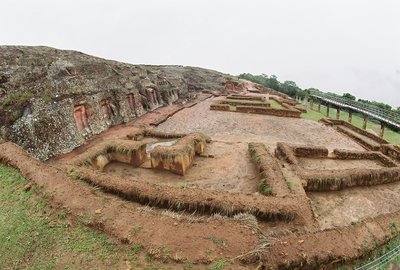 (above) The ruins of El Fuerte.